When Jan Janszoon Weltevree came in South-Korea by accident almost 400 years ago, for Korea it was the first introduction to the Western world, but it also the start of a long historical connection with the Alkmaar region. Nearly 400 years later, the two countries have reinvented each other as two of the biggest leaders in innovative technology when it comes to energy transition. 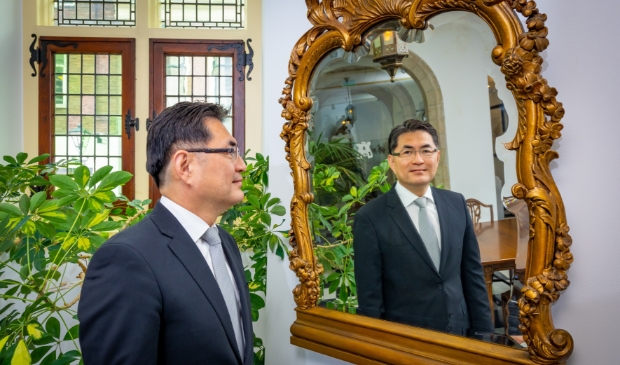 Alkmaar and South Korea find each other in the energy transition

When Jan Janszoon Weltevree came in South-Korea by accident almost 400 years ago, for Korea it was the first introduction to the Western world, but it also the start of a long historical connection with the Alkmaar region. Nearly 400 years later, the two countries have reinvented each other as two of the biggest leaders in innovative technology when it comes to energy transition.

At January 1, 2015 the municipalities of Graft-De Rijp and Schermer merged with Alkmaar. Because of the bond between Korea and De Rijp, our foundation also intends to make the whole municipality part of this relation.

In order to exchange mutual knowledge and perhaps to find openings for closer cooperation,

the municipality of Alkmaar last month invited the Korean ambassador to the Netherlands, Mr. Yeondoo Jeong, for a visit to the Alkmaar City Hall. To discuss this with Alderman Pieter Dijkman, in the position of deputy mayor, and the two CEOs of InVesta and SCW Systems, Peter Simões and Gerard Essing. "Very impressed", the ambassador arrived after his meeting for this interview, at which he did not hide his enthusiasm about the technological level in the Alkmaar region.

Very impressed by the technoloical level in the Alkmaar region

"It was a great meeting," he said. "And it is particularly noted that this region, with a population of about 600,000, is so vastly advanced in innovative technology, and so actively engaged in climate change and reducing emissions;” I'm very impressed!"

Korea is making an enormous effort to meet the global goal of being completely climate neutral by 2050. In 2019, the country designated three pilot cities that will run entirely on hydrogen. Recently, a fourth city was added. In addition, the Hydrogen Economy Law was adopted in Korea in 2020, to support the use of hydrogen and stimulate new technology, and the Hydrogen City Support Law was recently introduced. "We are actively promoting the transition to a climate-neutral society based on a hydrogen economy and sustainable energy", underlines Yeondoo Jeong. "Our aim is to become the world's best hydrogen applied country. Currently there are already 81 hydrogen charging stations in Korea and more than 12,000 hydrogen cars are registered, so we are on the right track."

To highlight this mission, Korea plans to close 10 old coal-fired power plants early next year and another 20 by 2034. "In addition, we also focus on the stock of renewable energy. We want to increase the capacity of solar energy to three times by mid-2030, and wind energy 14 times. By then, the dominant type of power plant in Korea will be a sustainable, green power plant."

The ambassador also finds the combination of investing in the hydrogen industry and expanding natural energy sources in Alkmaar. A lot of construction is being done here at the Energy Innovation Park where InVesta will find a new home. The first hydrogen charging station in the Netherlands also opened in Alkmaar in 2019.

How can Korea and the Netherlands learn from each other and build together?

"Korea is at the forefront of the application of hydrogen, so most hydrogen cars in the Netherlands are of Korean manufacture," says Yeondoo Jeong. "But more effort is needed in production volume, stock stability, affordable price level, transport, safety and an expansion of hydrogen applications. The Netherlands has also invested in the hydrogen industry in an early stage already and has a lot of experience and knowledge in this field. The level of technology is very high in both countries. I think Korea and the Netherlands are complementary and can certainly learn from each other when it comes to stock and applications. The Alkmaar hydrogen station is part of the ‘DUWAAL’ project that connects wind energy, hydrogen production and gas pipelines.

On a subsequent visit I would like to visit the charging stations, the hydrogen production and the distribution facilities in Alkmaar. Today's conversation is a good opportunity to broaden it from our ambition and work even more together."

Today's conversation is a good opportunity to broaden it from our ambition and work even more together.

Working together in the energy transition is an additional building block on top of the already existing intensive trade contacts between South Korea and the Netherlands. Yeondoo Jeong: "The Netherlands is the third largest trading partner in the EU for Korea, while Korea is the second largest country in Asia for Dutch exports, after China. While in the Netherlands everyone knows the brands Samsung, Hyundai and LG Electronics, many Dutch brands are also popular in Korea. For example, we know Heineken beer, Unilever and its products, Philips ... In recent years, semiconductors have become increasingly important, from Dutch companies such as ASML and NXP. These two play an important role in the global semiconductor industry. Korea itself is very big on this too. However, this certainly does not give competition but rather an additional relationship between our two countries, resulting in cooperation." 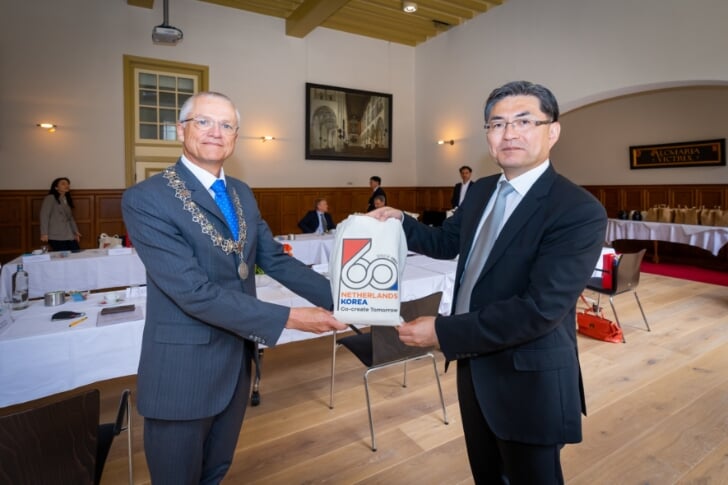 Pieter Dijkman and Yeondoo Jeong: a short focus on 60 years of diplomatic relations between the Netherlands and South-Korea. (Photo: Ed van de Pol)

Despite Covid-19, the trade volume between the Netherlands and Korea increased by 21% last year. "I hope it continues to grow. And although there are no Korean companies operating in Alkmaar yet, I hope that there will certainly be a cooperation between Korea and this region in the future. We have many similarities."

And then of course there is that historical connection via Jan Jansz.Weltevree. The man who built a life in Korea under the name of Pak Yon and as an advisor to the king with his Western technical knowledge contributed, among other things, to the further development of their cannon.

Just like last year, the ambassador, who has been in office for a year and a half now, will visit De Rijp in August to meet Jan Jansz. to attend the yearly Commemoration Day. "When I visited De Rijp last year and walked through Alkmaar for the first time after the commemoration, I could imagine that Pak Yon must have been very homesick. To that beautiful city and this special region."

Might the history of Pak Yon and its statue in De Rijp not play a somewhat bigger role in tourism from South Korea to this region?

"Koreans visit Amsterdam and the Zaanse Schans, they know the tulips and the windmills", Yeondoo Jeong outlines. "Alkmaar is indeed less well known. But following the footsteps of Jan Jansz. certainly offers opportunities. Many Korean youngsters nowadays want a 'storytelling visit' and they love photogenic environments and trendy restaurants to share on their social media. Those pictures will certainly help to promote this area. And besides, they also like to come across tourist information in their own language, such as at the statue of Pak Yon. I will definitely recommend and encourage everyone to visit this region. Especially now that I know how many beautiful innovative companies are located here. In that respect, our own visit today was very useful. It was impressive to get acquainted with these two companies and the agreements we were able to establish are very promising. All this will certainly get a follow-up." 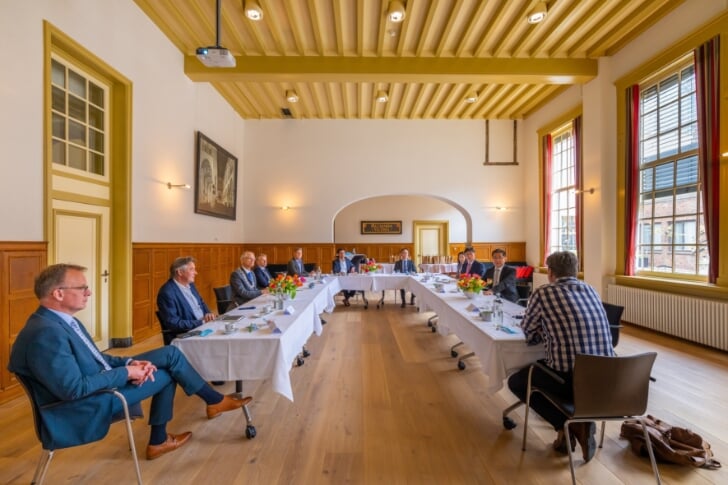