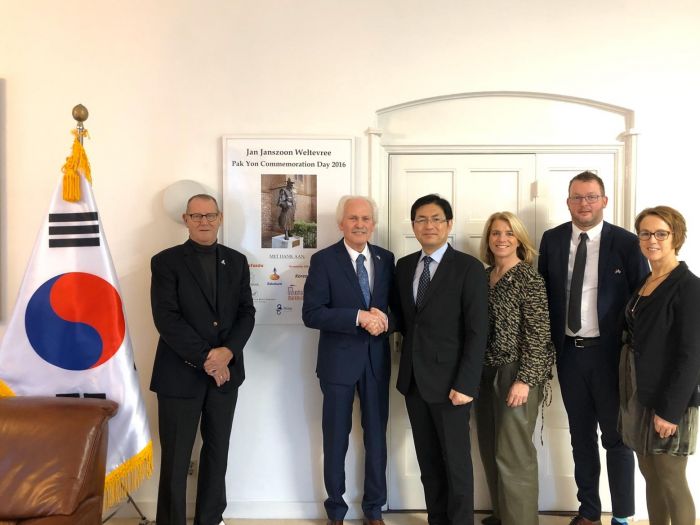 On wednesday, January 8, the newly appointed ambassador of the Republic of Korea, H.E. Yeondoo Jeong, had invited the board of the foundation for an introduction at the embassy. The delegation consisted of Jan, Frederik, Karin, Jaap and Francis.

The picture has been taken in the office of the ambassador, next to the Korean flag and the Commemoration Day 2016 poster.

During a very animated conversation, ideas and plans for the future were brought forward from both sides. It turned out that the ambassador had read up very well on the foundation. He had also talked about the foundation with the Dutch ambassador in Seoul, Mrs. Joanne Doornewaard.

The three main subjects were:

- The importance of Jan Janszn. Weltevree as the symbol for the friendship between the two countries;

- The degree in which people are familiar with the foundation and Jan Janszn. Weltevree; (In Seoul the ambassador lives close to the Grand Childrens Park and until recently he did not know that the statue is standing there) ;

- The future celebration of 60 years diplomatic relations between the two countries and the possible participation of the foundation in culture and other activities.

The possitive attitude of the ambassador again promises a fruitful period for the foundation during his tenure.