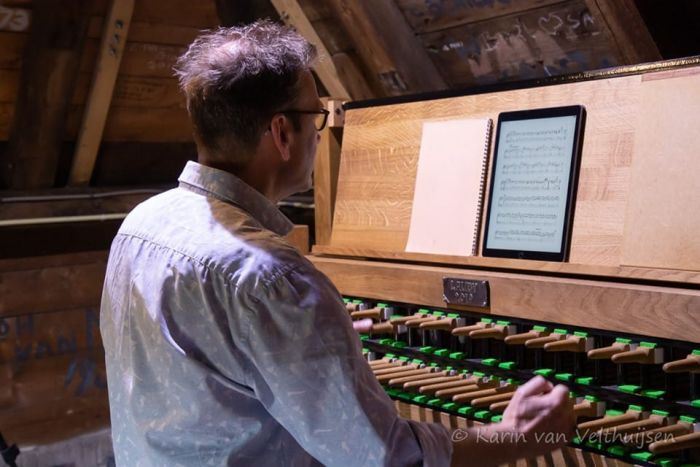 On the picture: Christiaan Winter

De Rijp and Schermer were then merged with the municipality of Alkmaar. "I stopped by and then I thought this tower is screaming for a carillon. Especially when I discovered that there had been one a long time ago, it was quick reasoning."

In 1654 the original set of bells got lost when a huge fire scourged the village. The church tower burnt down as well, including the carillon. When the church and tower had been rebuilt, no money was left for a new set of bells. "Before nobody ever had the idea to take any action", tells Frederik Harmsen member of the Carillon De Rijp Foundation. "Everybody took it for granted, until Christiaan got the ball rolling".

Money was raised and the first bell was founded in April 2017. They intended to finish the rest in the same year, but something came in between.  All members of the foundation are very glad that the bells chime over the village again. The carillon, played at by Christiaan Winter of course, sounds splendid and also other carillonneurs are very enthusiastic about it.

Hundreds of spectators attended this event during which the cheese carriers of Alkmaar had organised a special cheese market. On a huge screen everybody could view everything. Also the Korean Ambassador H.E. Yun Young Lee and his wife were present. They enjoyed themselves very much and took part in everything that happened. They even sat at the berries on which the cheese is carried.