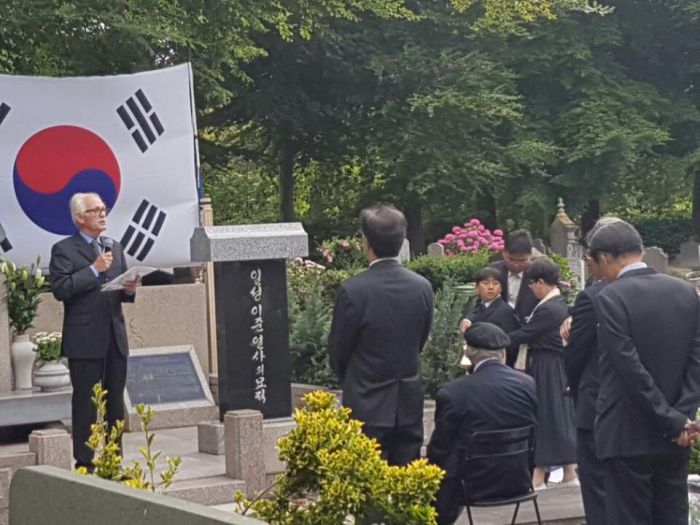 On July 14 2017 chairman of the foundation, Frederik Harmsen had been invited to deliver a speech at the

Part of his speech :

When in the morning of September 5th 1907 Yi Jun was buried here, only one Dutch official was present: Mr. Baron Mackay, City Councillor of The Hague and member of the Provincial Government. Mr. Mackay was chairman of the Young Men's Christian Association, the YMCA.

The connection between him and the deceased was that the latter was chairman of the YMCA in Korea. That’s why they knew each other. Baron Mackay delivered a short speech on that occasion.

Now I am standing here as one of the few Dutchmen. I am very honoured to be here today and to be able to say some words. In the first place out of respect for the honourable Yi Jun, a real hero for the Republic of Korea. A real fighter for freedom!

I stand here as chairman of the Jan Janszn. Weltevree Foundation. For those who don’t know it yet: Jan Janszn. Weltevree was the first Westerner who came to Korea and lived there for the rest of his life. This was in the 17th century. There is a statue of Jan Janszn. in the centre of De Rijp, the village where he was born in 1595.